We Minors are about to head out on a major adventure, and you know what?

Adventures are expensive. And I don't have a contract from a bunch of dwarves promising me an equal share of the treasure at the end. As the old saying goes, necessity is the mother of invention.

Here's a little context to help you make sense of things. Every year since we began Realm Makers, I have designed the official Conference T Shirt as well as a "fun design" that we sell as a simple artistic endeavor. From fandom to geekery, these shirts have definitely been popular--and I've enjoyed seeing friends and strangers alike wear them.

This year, we've been working with the fabulous Kirk DouPonce, illustrator extraordinaire, to generate some updated branding for the conference and our awards. Out of that process, this awesome dragon graphic arose. 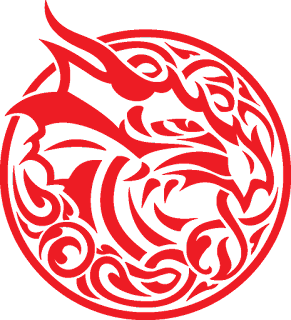 Being the dragon freak that I am, I was immediately ready to slap that puppy on everything, from our awards seals to our car to our bodies. (Not kidding, we had temporary tattoos made!)

More sober minds steadied us, however--we are hoping to take our show on the road, so to speak, and attend multiple homeschool conferences as a vendor in the near future. (More on that in due time.) But just like the way the words "magic," and "fantasy" might keep you out of some homeschool conferences, a banner with a giant red dragon might just have the same effect.

So, OK, Realm Makers won't wear the dragon badge on everything.

But that doesn't mean our nerdy following can't wear the dragon on a shirt!

And so, ahead of Realm Makers: 2017, we're doing a pre-sale campaign on these awesome shirts. Not only because we think our fans will like them, but because of that thing I mentioned up above: adventures are expensive, and we need to get creative about how we're going to fund driving from Pennsylvania to Reno and back again. It will be a grand total of 7000 miles and 4 weeks on the road.

I will be working on freelance projects along the way, but as is the nature of the freelance life, we have to guard against those times of slim pickings, which life has been dishing out over recent months.

So, if you're so inclined over the next couple weeks, I would be honored if you would be willing to order a dragon shirt for you or a friend. They come in men's and ladies' styles. You can elect to have them shipped straight to you, or if you'll be with us at Realm Makers at the end of July, you can save the shipping and pick your shirt up there.

I can't make any guarantee of there being available inventory of these shirts after this campaign, so get 'em while they're hot.
dragon Realm Makers t-shirt design

Popular posts from this blog

August 24, 2020
Hey longtime friends! A while back I gave myself permission to quit blogging because I kind of got to the point of hating it. (Sorry to say. And current advice to authors includes "Don't do stuff you don't love.") Weirdly enough, I started blogging again today, but not here. I'm going to keep it all over on my website: rebeccapminor.com. I've added a blog there I'm calling The Wellness Epic. Why that name? Mostly because an epic typically follows a character or characters through a long span of time, and my chronic illness journey has definitely done that. So if you are interested in following my quest to defeat my chronic illnesses, as well as hearing updates on creative pursuits and life happenings, please come see me at The Wellness Epic .
Read more

The Constant Terror of Being an Author 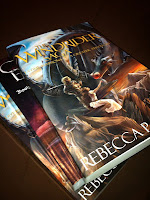 On my lunch break today, I ran an errand of such gut-twisting formidability that I’m lucky the lunch I scarfed down on the way back to my cubicle stayed where it belonged. What was that errand, you ask? Dropping off my first load of books at the local, independent bookstore to be shelved and sold on consignment. Maybe this doesn’t sound so terrifying to you. It probably isn’t to most people. But for artistic types like myself who are consistently underwhelmed by our own talent for making the thing we can’t help but produce any more than we can help breathing, it was enough to induce heart palpitations. You see, I handed those books to a real person in the store. (A kind woman by the name of Kit who actually reads the stuff local authors bring to her in search of shelf space.) This woman had no prior connection to me. She didn’t seek my books out, I brought them to her and asked for a spot on her shelves. She was a perfect specimen of someone both objective and knowledgeab
Read more 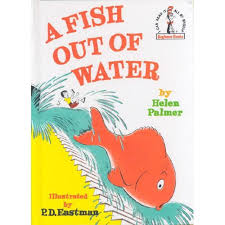 One of my kids' favorite books is A Fish Out of Water by Helen Palmer...I'm sure most of you probably know it. It's that story where a little boy buys a fish at the pet store, and despite the shop keeper's warning, feeds the fish too much, and the fish begins to grow and grow and grow. The boy moves the fish from bowl to pitcher to pot to public swimming pool in order to find a place where the monstrosity he's created can fit. There are illustrations all through this book of a fish that doesn't even have enough room to turn around in whatever container he's occupying. He shifts from oblivious to shocked to dejected. Authors in the Christian publishing world, in terms of marketing, seem to have this "big fish, little bowl" scenario working against them. Not in the sense that we've outgrown Christian publishing with our writing prowess and sheer market massiveness, but just that there's simply not enough water in Christian publishing in
Read more

RebeccaPMinor
Mom of 3 boys, wife of their father. Author of The Windrider Saga and Curse Bearer. An occasional freelance artist, working in anything from animation, to murals, to sculpture, to book illustration.